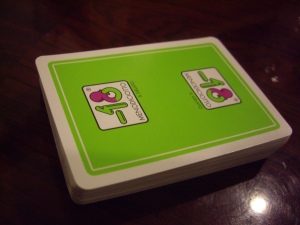 Yes for more posts. Since I only have a week left of winter break.

Up for today is a double deck set of cards for Il Gelato….I think its in Italy. The cards themselves aren’t anything special. They’re Dal Negro, so they’re like really stiff cardboard. The deck is thick, which makes everything a lot more less manageable. The box says bridge, but they’re poker size….perhpas still meant for a game of bridge,,,at least that might be what the ad card was used for. Bridge instructions. In a language I can’t read. Oh well.

I..think this was an impulse buy? The white bordered solid color back design was eye-catching. >   .  >

I have no idea what the logo is though. The decks come in green and purple. Just like those limited edition Anglos09 I decided to never pick up. And those green and purple bikes I got that no one actually knows I have.